Area Of Sector Of A Circle

Home → Area Of Sector Of A Circle

Before knowing about a sector of a circle, let’s know how the area of a circle is calculated. When it comes to the area, it is always related to two-dimensions. Anything which is two dimensional can form a plane. So, any two-dimensional figure will have area. What about a circle?

Definition 2: If all the points which lie inside and on the circle are taken together, the plane constructed is known as a disk.

A disk is basically the region bounded by a circle. So, the area of a circle will always be that of the disk. The area, A of the circle with radius r is given by

Definition 3: The portion of the circle enclosed by two radii and the corresponding arc is known as the sector of a circle.

Basically, a sector is the portion of a circle. It would hence be right to say that a semi-circle or a quarter-circle is a sector of the given circle. In fig.1, OPAQ is called the minor sector and OPBQ is called the major sector because of lesser and greater areas. The angles subtended by the arcs PAQ and PBQ are equal to the angle of the sectors OPAQ and OPBQ respectively. When the angle of the sector is equal to 180°, there is no minor or major sector.

In a circle with radius r and center at O, let ∠POQ = θ (in degrees) be the angle of the sector. Then, the area of a sector of circle formula is calculated using the unitary method. 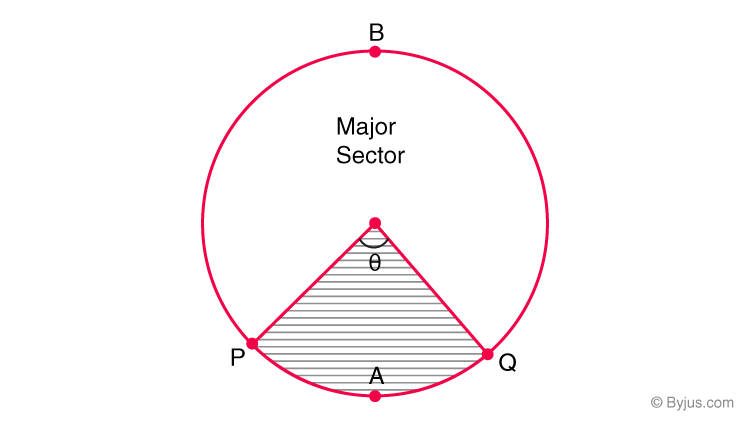 So, when the angle is θ, area of sector, OPAQ,

Similarly, length of the arc (PQ) of the sector with angle θ,

Some examples for better understanding are discussed from here on.

To practice more on are of sector of a circle, download BYJU’S – The Learning App from the Google Play Store.