The main application of these numbers is to represent periodic motions such as water waves, alternating current, light waves, etc., which rely on sine or cosine waves, etc.

Hence, a complex number is a simple representation of addition of two numbers, i.e., real number and an imaginary number. One part of it is purely real and the other part is purely imaginary.

What are Real Numbers?

What are Imaginary Numbers?

We denote √-1 with the symbol ‘i’, which denotes Iota (Imaginary number).

See the table below to differentiate between a real number and an imaginary number.

Is 0 a complex Number?

In the graph below, check the representation of complex numbers along the axes. Here we can see, the x-axis represents real part and y represents the imaginary part.

Let us see an example here. If we have to plot a graph of complex number 3 + 4i, then: 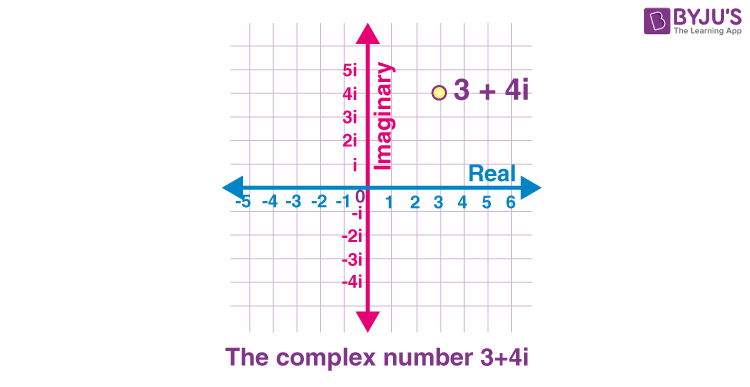 Now, in case of complex numbers, finding the modulus has a different method.

This expression is obtained when we apply the Pythagorean theorem in a complex plane. Hence, mod of complex number, z is extended from 0 to z and mod of real numbers x and y is extended from 0 to x and 0 to y respectively. Now these values form a right triangle, where 0 is the vertex of the acute angle. Now, applying Pythagoras theorem,

When we solve a quadratic equation in the form of ax2 +bx+c = 0, the roots of the equations can be determined in three forms;

The division of two complex numbers can be performed by multiplying the numerator and denominator by its conjugate value of the denominator, and then applying the FOIL Method.

Power of Iota (i)

Depending upon the power of “i”, it can take the following values;

Where k can have an integral value (positive or negative).

Similarly, we can find for the negative power of i, which are as follows;

Multiplying and dividing the above term with i, we have;

Therefore, for an imaginary number, √a × √b is not equal to √ab.

Let us see some of the identities.

The properties of complex numbers are listed below:

The Modulus of z is represented by |z|.

Similar to the XY plane, the Argand(or complex) plane is a system of rectangular coordinates in which the complex number a+ib is represented by the point whose coordinates are a and b.

We find the real and complex components in terms of r and θ, where r is the length of the vector and θ is the angle made with the real axis. Check out the detailed argand plane and polar representation of complex numbers in this article and understand this concept in a detailed way along with solved examples.

Based on the explanation given above in this article, try to solve the following questions.

What is meant by complex numbers?

How to divide the complex numbers?

Write down the additive identity and inverse of complex numbers.

Write down the multiplicative identity and inverse of the complex number.

Learn more about the Identities, conjugate of the complex number, and other complex numbers related concepts at BYJU’S. Also, get additional study materials for various maths topics along with practice questions, examples, and tips to be able to learn maths more effectively.