Conic sections are one of the important topics in Geometry. There are different types of conic sections in maths that can be defined based on the angle formed between the plane and intersection of the right circular cone with it.

What are Conic Sections

A curve, generated by intersecting a right circular cone with a plane is termed as ‘conic’. It has distinguished properties in Euclidean geometry. The vertex of the cone divides it into two nappes referred to as the upper nappe and the lower nappe. 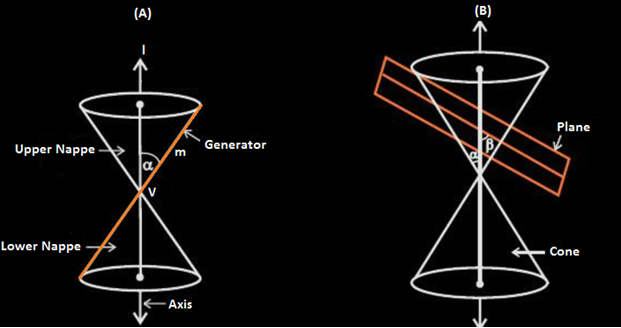 In figure B, the cone is intersected by a plane and the section so obtained is known as a conic section. Depending upon the position of the plane which intersects the cone and the angle of intersection β, different types of conic sections are obtained. Namely;

The rear mirrors you see in your car or the huge round silver ones you encounter at a metro station are examples of curves. Curves have huge applications everywhere, be it the study of planetary motion, the design of telescopes, satellites, reflectors etc. Conic consist of curves which are obtained upon the intersection of a plane with a double-napped right circular cone. It has been explained widely about conic sections in class 11. Let us discuss the formation of different sections of the cone, formulas and their significance.

Check the formulas for different types of sections of a cone in the table given here.

Focus, Eccentricity and Directrix of Conic

A conic section can also be described as the locus of a point P moving in the plane of a fixed point F known as focus (F) and a fixed line d known as directrix (with the focus not on d) in such a way that the ratio of the distance of point P from focus F to its distance from d is a constant e known as eccentricity. Now,

Apart from focus, eccentricity and directrix, there are few more parameters defined under conic sections.

Sections of the Cone

Consider a fixed vertical line ‘l’ and another line ‘m’ inclined at an angle ‘α’ intersecting ‘l’ at point V as shown below: 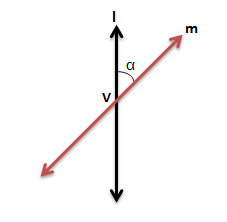 The initials as mentioned in the above figure A carry the following meanings:

Let us briefly discuss the different conic sections formed when the plane cuts the nappes (excluding the vertex).

If β=90o, the conic section formed is a circle as shown below. 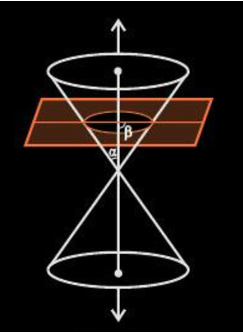 If α<β<90o, the conic section so formed is an ellipse as shown in the figure below. 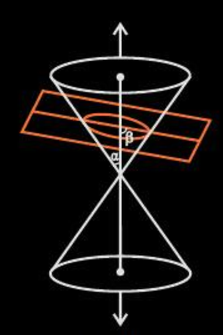 If α=β, the conic section formed is a parabola (represented by the orange curve) as shown below. 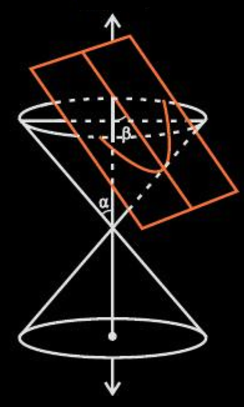 If 0≤β<α, then the plane intersects both nappes and the conic section so formed is known as a hyperbola (represented by the orange curves). 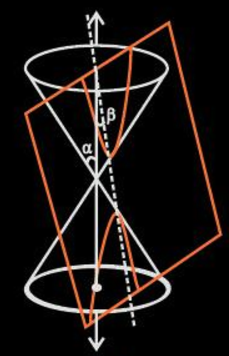 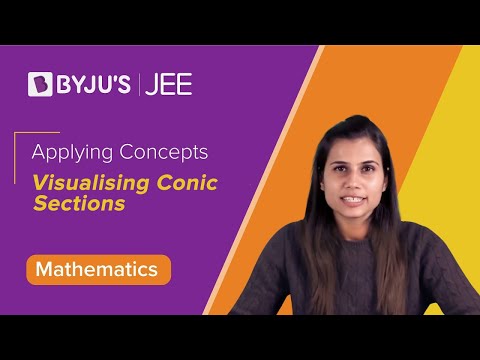 After the introduction of Cartesian coordinates, the focus-directrix property can be utilised to write the equations provided by the points of the conic section. When the coordinates are changed along with the rotation and translation of axes, we can put these equations into standard forms. For ellipses and hyperbolas, the standard form has the x-axis as the principal axis and the origin (0,0) as the centre. The vertices are (±a, 0) and the foci (±c, 0). Define b by the equations c2= a2 − b2 for an ellipse and c2 = a2 + b2 for a hyperbola.

For a circle, c = 0 so a2 = b2. For the parabola, the standard form has the focus on the x-axis at the point (a, 0) and the directrix is the line with equation x = −a. In standard form, the parabola will always pass through the origin.

If the plane intersects exactly at the vertex of the cone, the following cases may arise: 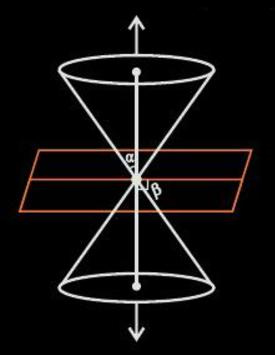 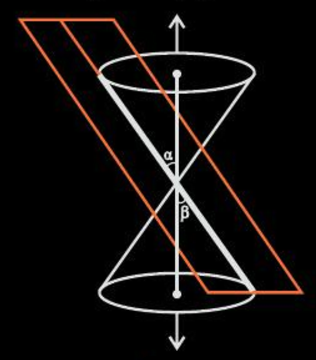 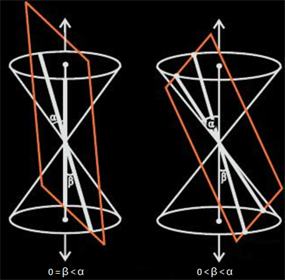 Download BYJU’S-The Learning App and get personalized videos where the concepts of geometry have been explained with the help of interactive videos.

What are the 4 conic sections?

Based on the inclination of angle between the plane and the cone, we can categorize the conic sections into 4 types. They are:
Circles
Ellipses
Parabolas
Hyperbolas

What is a conic section in real life?

We can observe conic sections in many real-life situations. For example, when we consider the Sun as one focus, then the path of planets form ellipses around it. Parabolic mirrors help in gathering light beams at the focus of the parabola.

How do you identify a conic section?

What is the best definition of a conic section?

A conic section can be best defined as the curve formed from a plane’s intersection with a right circular cone.

Menaechmus was an ancient Greek mathematician who discovered the conic sections. Also, it is believed that the first definition of a conic section was given by him.

Is a Ferris wheel a conic section?

Yes, the Ferris Wheel is a conic section since it is one of the primary examples of a circle that we can observe in real life. This is because all the points on the outer rim of the wheel are equidistant from the centre.