Dihedral angle is defined as the angle formed when two planes intersect each other. The two intersecting planes here are the cartesian planes. The cartesian geometry is defined for two-dimensional and three-dimensional planes, which determines the shapes of different objects.

In general, we usually a combination of two lines or line segments to represent the angles. But in Geometry, we deal with the behaviour of two or more planes together. The problems related to two or more planes can be seen very often. The planes can also intersect one another. When we talk about the three-dimensional system, given two distinct planes either intersect each other or are parallel to each other. When two planes intersect, they are inclined at some angle which is known as the dihedral angle. In this article, we will discuss its definition, formula, method of its calculation and some solved examples.

From the above figure, we can see, the two planes A and B are intersecting each other with an inclination of angle θ. 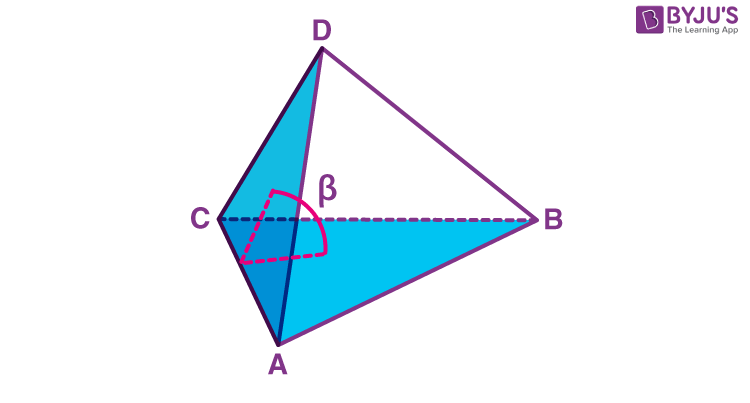 Assume that the equations of two planes are given as:

If the acute angle between these planes be θ, then the formula for α would be given as below :

It can also be written as:

How to Find the Dihedral Angle?

To calculate the value of the dihedral angle, follow the below steps:

Step 1: Determine the equations of the plane and rearrange the terms in the following format: px + qy + rz + s = 0.

Step 3: Plug above values in the formula of dihedral angle which is:

Step 4: Solve and calculate the value of θ.

Compare the given plane equation with the standard form:

The formula to find the dihedral angle is

Stay tuned with BYJU’S – The Learning App and also download the app to learn all the important Maths-related articles and explore videos.