Equation of A Plane

Home → Equation of A Plane

The equation of a plane in the three-dimensional space is defined with the normal vector and the known point on the plane. A Vector is a physical quantity that with its magnitude also has a direction attached to it. A normal vector means the line which is perpendicular to the plane. With reference to an origin, the position vector basically denotes the location or position (in a 3D Cartesian system) of a point. The Cartesian equation of a plane in 3 Dimensional space and vectors are explained in this article.

Equation of a Plane in Three Dimensional Space

Generally, the plane can be specified using four different methods. They are: 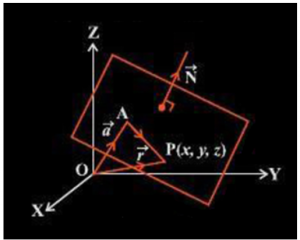 Position vector simply denotes the position or location of a point in the three-dimensional Cartesian system with respect to a reference origin.

For point P to lie on the given plane it must satisfy the following condition:

From the figure given above it can be seen that,

This equation represents the vector equation of a plane.

We will assume that P, Q and R points are regarded as x1, y1, z1 and x2, y2, z2 in respectively to change the equation into the Cartesian system. A, B and C will be the assumed direction ratios. Thus,

Substituting these values in the vector equation of a plane, we have