Most of the phenomena studied in the domain of Engineering and Science are periodic in nature. For instance, current and voltage in an alternating current circuit. These periodic functions could be analyzed into their constituent components (fundamentals and harmonics) by a process called Fourier analysis.

Periodic functions occur frequently in the problems studied during Engineering education. Their representation in terms of simple periodic functions such as sine and cosine function, which leads to Fourier series(FS). Fourier series is a very powerful tool in connection with various problems involving partial differential equations. In this article, let us discuss the Fourier analysis with examples.

What is the Fourier Series?

A Fourier series is an expansion of a periodic function f(x) in terms of an infinite sum of sines and cosines. Fourier Series makes use of the orthogonality relationships of the sine and cosine functions. 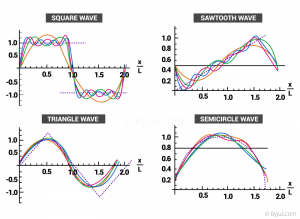 A function is periodic of period L if f(x+L) = f(x) for all x in the domain of f. The smallest positive value of L is called the fundamental period.

It is easy to verify that if the functions f1, . . . , fn are periodic of period L, then any linear combination

is also periodic. Furthermore, if the infinite series

consisting of 2L-periodic functions converges for all x, then the function to which it converges will be periodic of period 2L. There are two symmetry properties of functions that will be useful in the study of Fourier series.

Even and Odd Function

Since x is odd, and cos x is even

The product of two odd functions is even: x sin x is even

The product of two even functions is even: x2cos x is even

The product of an even function and an odd function is

To find a Fourier series, it is sufficient to calculate the integrals that give the coefficients a0, an, and bn and plug them into the big series formula.

Typically, f(x) will be piecewise-defined.

Big advantage that Fourier series have over Taylor series: the function f(x) can have discontinuities.

The above Fourier series formulas help in solving different types of problems easily.

A Fourier Series has many applications in mathematical analysis as it is defined as the sum of multiple sines and cosines. Thus, it can be easily differentiated and integrated, which usually analyses the functions such as saw waves which are periodic signals in experimentation. It also provides an analytical approach to solve the discontinuity problem. In calculus, this helps in solving complex differential equations.

For more information, visit BYJU’S – The Learning App and register with the app to watch all the interactive videos to learn with ease.

What is the Fourier Series formula?

What is the Fourier series used for?

Fourier series is used to describe a periodic signal in terms of cosine and sine waves. In other other words, it allows us to model any arbitrary periodic signal with a combination of sines and cosines.

How do you solve a Fourier series?

The steps to be followed for solving a Fourier series are given below:
Step 1: Multiply the given function by sine or cosine, then integrate
Step 2: Estimate for n=0, n=1, etc., to get the value of coefficients.
Step 3: Finally, substituting all the coefficients in Fourier formula.

What are the 2 types of Fourier series?

The two types of Fourier series are trigonometric series and exponential series.

What is meant by the Fourier series?

A Fourier series is an expansion of a periodic function f(x) in terms of an infinite sum of sines and cosines. Fourier Series makes use of the orthogonality relationships of the sine and cosine functions.