It is not necessary that here one variable is dependent on others, or one causes the other, but there is some critical relationship between the two variables. In such cases, we use a scatter plot to imply the strength of the relationship between the variables. If there is no relation or linking between the variables, the scatter plot does not indicate any increasing or decreasing pattern. For such cases, the linear regression design is not beneficial to the given data.

A linear regression line equation is written in the form of:

Y is the dependent variable and plotted along the y-axis

Now, here we need to find the value of the slope of the line, b, plotted in scatter plot and the intercept, a.

Almost all real-world regression patterns include multiple predictors, and basic explanations of linear regression are often explained in terms of the multiple regression form. Note that, though, in these cases, the dependent variable y is yet a scalar.

The most popular method to fit a regression line in the XY plot is the method of least-squares. This process determines the best-fitting line for the noted data by reducing the sum of the squares of the vertical deviations from each data point to the line. If a point rests on the fitted line accurately, then its perpendicular deviation is 0. Because the variations are first squared, then added, their positive and negative values will not be cancelled. 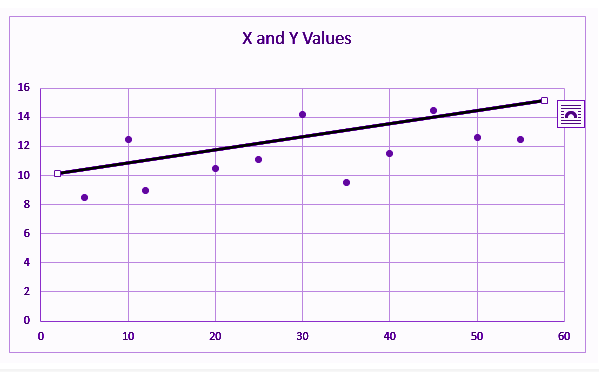 B0 is a constant

B1 is the regression coefficient

If a random sample of observations is given, then the regression line is expressed by;

In the linear regression line, we have seen the equation is given by;

B0 is a constant

B1 is the regression coefficient

Now, let us see the formula to find the value of the regression coefficient.

Where xi and yi are the observed data sets.

And x and y are the mean value.