Lines and Angles for class 9 notes are provided here. The complete notes on lines and angles are given, which covers the various concepts such as parallel lines, transversal, angles, intersecting lines, interior angles are explained with the examples. Go through the below article to learn about lines and angles.

Parallel lines with a transversal

Lines parallel to the same line

For More Information On Parallel Lines and Intersecting Lines, Watch The Below Video: 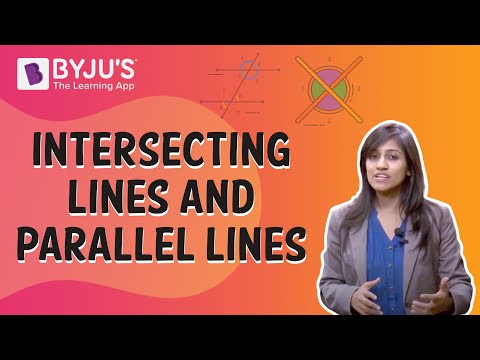 Angles and types of angles

When 2 rays originate from the same point at different directions, they form an angle.

To know more about Angles and Types of Angles, visit here.

2 angles are adjacent if they have the same vertex and one common point.

When 2 adjacent angles are supplementary, i.e they form a straight line (add up to 180∘), they are called a linear pair.

When two lines intersect at a point, they form equal angles that are vertically opposite to each other.

To know more about Lines and Angles, visit here.

Basic Properties of a Triangle

Triangle and sum of its internal angles

Sum of all angles of a triangle add up to 180∘

An exterior angle of a triangle = sum of opposite internal angles

– If a side of a triangle is produced, then the exterior angle so formed is equal to the sum of the two interior opposite angles

For More Information On Properties Of Triangle, Watch The Below Video.

To know more about Properties of a Triangle, visit here.