A vector is a physical quantity which is represented both in direction and magnitude. In the upcoming discussion, we shall learn about how to add different vectors. There are different laws of vector addition and they are:

Suppose, we have two vectors A and B as shown.

Now the method to add these is very simple, what we do is to simply place the head of one vector over the tail of the other vector as shown below.

Now join the other endpoints of both the vectors together as shown in the below figure.

The resultant of the given vectors is given by the vector C which represents the sum of vectors  A and B.

Similarly, if you want to subtract both the vectors using the triangle law then simply reverse the direction of any vector and add it to the other one as shown. 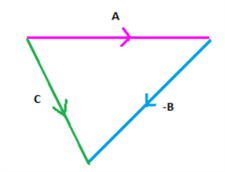 Now, this can be represented mathematically as:

This law is also very similar to the triangle law of vector addition. Consider the two vectors again. 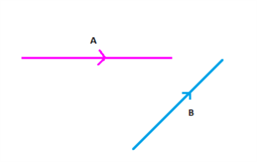 The resultant vector is shown by C. This is known as the parallelogram law of vector addition.

Now let us take an example to understand this topic better.

Thus, you are now thorough with how vectors are added and subtracted. There are other operations like vector multiplication which are very important in terms of understanding vectors better. To practice more on vectors with laws of vector addition, download BYJU’S – The learning app.