Vectors, in Maths, are objects which have both, magnitude and direction. Magnitude defines the size of the vector. It is represented by a line with an arrow, where the length of the line is the magnitude of the vector and the arrow shows the direction. It is also known as Euclidean vector or Geometric vector or Spatial vector or simply “vector“.

Two vectors are said to equal if their magnitude and direction are the same. It plays an important role in Mathematics, Physics as well as in Engineering. According to vector algebra, a vector can be added to another vector, head to tail. The order of addition of two vectors does not matter, because the result will be the same. Check laws of vector addition for more details.

The vectors are defined as an object containing both magnitude and direction. Vector describes the movement of an object from one point to another.  Vector math can be geometrically picturised by the directed line segment.

A vector is defined as a mathematical structure. It has many applications in the field of physics and geometry. We know that the location of the points on the coordinate plane can be represented using the ordered pair such as (x, y). The usage of the vector is very useful in the simplification process of three-dimensional geometry.

Along with the term vector, we have heard the term scalar. A scalar actually represents the “real numbers”. In simpler words, a vector of “n” dimensions is an ordered collection of n elements called “components“.

The most common examples of the vector are Velocity, Acceleration, Force, Increase/Decrease in Temperature etc. All these quantities have directions and magnitude both. Therefore, it is necessary to calculate them in their vector form.

Also, speed is a quantity that has magnitude but no direction. This is the basic difference between speed and velocity.

As we know already, a vector has both magnitude and direction. In the above figure, the length of the line AB is the magnitude and head of the arrow points towards the direction. 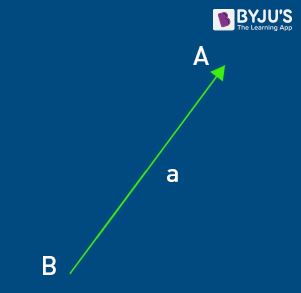 Therefore, vectors between two points A and B is given as,

Magnitude of a Vector

A unit vector has a length (or magnitude) equal to one, which is basically used to show the direction of any vector. A unit vector is equal to the ratio of a vector and its magnitude. Symbolically, it is represented by a cap or hat (^).

If a is vector of arbitrary length and its magnitude is ||a||, then the unit vector is given by:

It is also known as normalising a vector.

A vector with zero magnitudes is called a zero vector. The coordinates of zero vector are given by (0,0,0) and it is usually represented by 0 with an arrow (→) at the top or just 0.

The sum of any vector with zero vector is equal to the vector itself, i.e., if ‘a’ is any vector, then;

Note: There is no unit vector for zero vector and it cannot be normalised.

In maths, we have learned the different operations we perform on numbers. Let us learn here the vector operation such as Addition, Subtraction, Multiplication on vectors.

The two vectors a and b can be added giving the sum to be a + b. This requires joining them head to tail.

Before going to the operation it is necessary to know about the reverse vector(-a).

A reverse vector (-a) which is opposite of ‘a’ has a similar magnitude as ‘a’ but pointed in the opposite direction.

First, we find the reverse vector.

Then add them as the usual addition.

Such as if we want to find vector b – a

The scalar triple product, also called a box product or mixed triple product, of three vectors, say a, b and c is given by (a×b)⋅c. Since it involves dot product and evaluates single value, therefore stated as the scalar product. It is also denoted by (a b c).

The major application of the scalar triple product can be seen while determining the volume of a parallelepiped, which is equal to the absolute value of |(a×b)⋅c|, where a, b and c are the vectors denoting the sides of parallelepiped respectively. Hence,

Basically, there are two types of vector multiplication:

The cross product of two vectors results in a vector quantity. It is represented by a cross sign between two vectors.

The mathematical value of a cross product-

θ is the angle between two vectors a & b.

and \(\hat{n}\) is a unit vector showing the direction of the multiplication of two vectors.

The dot product of two vectors always results in scalar quantity, i.e. it has only magnitude and no direction. It is represented by a dot (.) in between two vectors.

The mathematical value of the dot product is given as

There are two components of a vector in the x-y plane.

Breaking a vector into its x and y components in the vector space is the most common way for solving vectors. 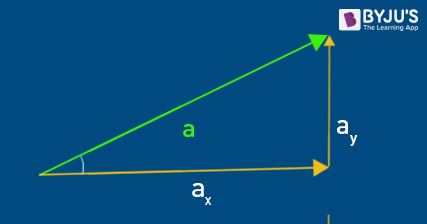 A vector “a” is inclined with horizontal having an angle equal to θ.

This given vector “a” can be broken down into two components i.e. ax and ay.

The component ax is called a “Horizontal component” whose value is a cos θ.

The component ay is called a “Vertical component” whose value is a sin θ.

Some of the important applications of vectors in real life are listed below:

Example 1: Given vector V, having a magnitude of 10 units & inclined at 60°. Break down the given vector into its two components. 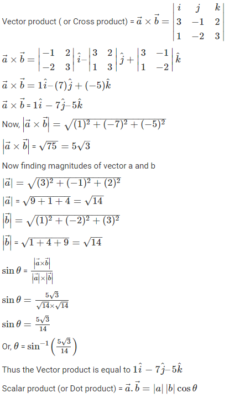 To learn all concepts in Math in a more engaging way, register at BYJU’S. Also, watch interesting videos on various maths topics by downloading BYJU’S– The Learning App.

What is a vector in Maths?

A vector is a quantity which has both magnitude and direction. It defines the movement of the object from one point to another.

What are the examples of vectors?

The examples of vectors are force, velocity, acceleration, etc., since these quantities have both magnitude and direction.

What are the types of vectors?

What is the magnitude of the vector?

The magnitude of a vector is shown by vertical lines on both the sides of the given vector “|a|”. It represents the length of the vector.

What is the difference between scalar and vector?