To define the cosine function of an acute angle, consider a right-angled triangle provided with the angle of interest and the sides of a triangle. The three sides of the triangle are defined as follows:

Let us consider a unit circle with the center at the origin of the coordinate axes say ‘x’ and ‘y’ axis. Let P (a, b) be any point on the circle that forms an angle AOP = x radian. This means that the length of the arc AP equals to x. From this, we define the value that cos x = a and sin x = b. 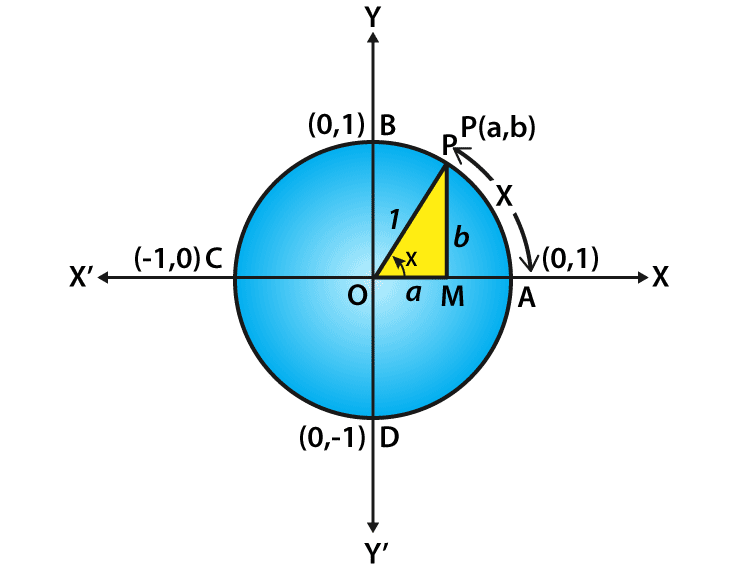 By using the unit circle, consider a right-angled triangle OMP.

By using the Pythagorean theorem, we get;

Thus, every point on the unit circle is defined as;

Note that the one complete revolution subtends an angle of 2π radian at the center of the circle, and from the unit circle it is defined as follows:

It is observed that the values of sin and cos functions do not change if the values of x and y are the integral multiples of 2π. When we consider the one complete revolution from the point p, it again comes back to the same point. For a triangle, ABC having the sides a, b, and c opposite the angles A, B, and C respectively, the cosine law is defined.

For an angle C, the law of cosine is stated as

In a similar way, we can find the values of other degrees of trigonometric functions depends on the quadrant value.

Get more information on cos 90 degrees and other trigonometric functions, visit BYJU’S and also watch the interactive videos to clarify the doubts.