In Mathematics, Divisor means a number which divides another number. It is a part of the division process. In division, there are four significant terms which are commonly used, such as Dividend, Divisor, Quotient and Remainder. You will learn the definitions of these terms in this article.

In Mathematics, we perform the most basic operations, which are addition, subtraction, division and multiplication. These arithmetic operations have been taught in our primary classes. Here, you will learn about the division factor, known as the divisor.
Dividend ÷ Divisor = Quotient

The operation of division in the form of:
Dividend ÷ Divisor = Quotient

The above expression can also be written as:

Here, ‘÷’ is the symbol of division. But sometimes, it is also represented by the ‘/’ symbol, such as

How to represent the Divisor?

We can represent the divisor in three different ways. These are given in the figure below: 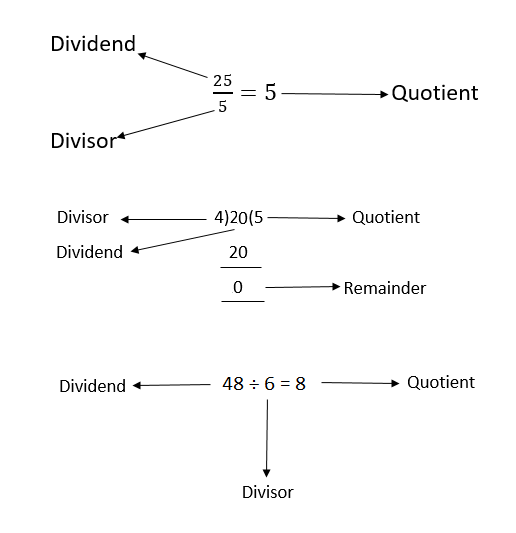 We know that the numbers which divide the given number exactly are referred to as factors. These are also called divisors. From this, we can write the divisors of 18 as given below:

The divisors of 26 are the numbers which divide it exactly without leaving any remainder.

What is a divisor?

A divisor is an integer that divides another integer to produce a result. The number which is divided is called the dividend and the result obtained here is the quotient.
Dividend ÷ Divisor = Quotient

Is a number a divisor of itself?

Can a divisor be negative?

Divisors can be both positive and negative, but usually, we consider positive terms for divisors. For example, 4 is divisible by six divisors: -2, -1, -4, and 2, 1, 4. But only positive integers are considered here.

What is the divisor in a fraction?

Is 1 a prime divisor?

No, it is not. To be a prime divisor a number has to meet the prime number condition, according to which there should be a minimum of two factors.