The word Ogive is a term used in architecture to describe curves or curved shapes. Ogives are graphs that are used to estimate how many numbers lie below or above a particular variable or value in data. To construct an Ogive, firstly, the cumulative frequency of the variables is calculated using a frequency table. It is done by adding the frequencies of all the previous variables in the given data set. The result or the last number in the cumulative frequency table is always equal to the total frequencies of the variables. The most commonly used graphs of the frequency distribution are histogram, frequency polygon, frequency curve, Ogives (cumulative frequency curves). Let us discuss one of the graphs called “Ogive” in detail. Here, we are going to have a look at what is an Ogive, graph, chart and an example in detail.

Cumulative frequency is defined as the sum of all the previous frequencies up to the current point. To find the popularity of the given data or the likelihood of the data that fall within the certain frequency range, Ogive curve helps in finding those details accurately.

Create the Ogive by plotting the point corresponding to the cumulative frequency of each class interval. Most of the Statisticians use Ogive curve, to illustrate the data in the pictorial representation. It helps in estimating the number of observations which are less than or equal to the particular value.

The two methods of Ogives are:

Greater than or More than Ogive

How to Draw Less Than Ogive Curve?

How to Draw Greater than or More than Ogive Curve?

Construct the more than cumulative frequency table and draw the Ogive for the below-given data.

An Ogive is connected to a point on the x-axis, that represents the actual upper limit of the last class, i.e.,( 80.5, 0)

More than the Ogive Curve: 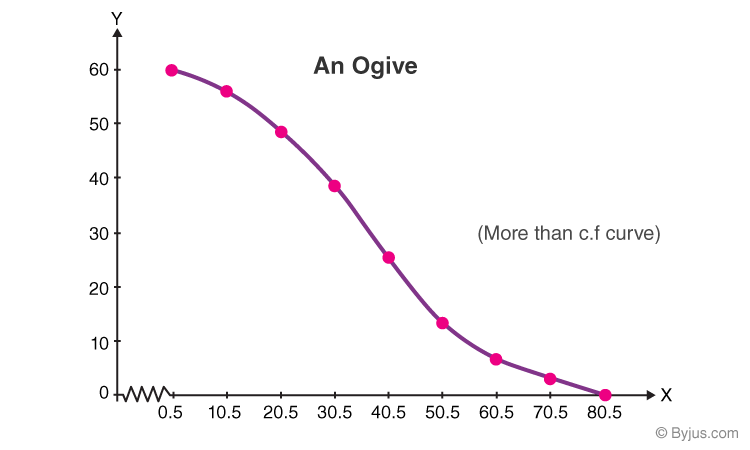 Stay tuned with BYJU’S – The Learning app and explore more Maths-related videos to learn with ease.