The value of sin 30 degrees is 0.5. Sin 30 is also written as sin π/6, in radians. The trigonometric function also called as an angle function relates the angles of a triangle to the length of its sides. Trigonometric functions are important, in the study of periodic phenomena like sound and light waves, average temperature variations and the position and velocity of harmonic oscillators and many other applications. The most familiar three trigonometric ratios are sine function, cosine function and tangent function.

For angles less than a right angle, trigonometric functions are commonly defined as the ratio of two sides of a right triangle. The angles are calculated with respect to sin, cos and tan functions. Usually, the degrees are considered as 0°, 30°, 45°, 60°, 90°, 180°, 270° and 360°. Here, we will discuss the value for sin 30 degrees and how to derive the sin 30 value using other degrees or radians.

The exact value of sin 30 degrees is ½. To define the sine function of an angle, start with a right-angled triangle ABC with the angle of interest and the sides of a triangle. The three sides of the triangle are given as follows:

Sine Law: The sine law states that the sides of a triangle are proportional to the sine of the opposite angles.

The sine rule is used in the following cases :

Case 1: Given two angles and one side (AAS and ASA)

The other important sine values with respect to angle in a right-angled triangle are:

As you know, for finding the trigonometric ratios, we need to know the lengths of the sides of the triangle. So, let us suppose that AB=2a

Therefore, Sin 30 degree equals to the fractional value of 1/ 2.

The value of sin 30 degrees and sin 150 degrees are equal.

Since, the angle 150 degrees lies on the IInd quadrant, therefore the value of sin 150 is positive.The internal angle of triangle is 180 – 150=30, which is the reference angle.

The value of sine in other two quadrants, i.e. 3rd and 4th are negative.

In the same way, 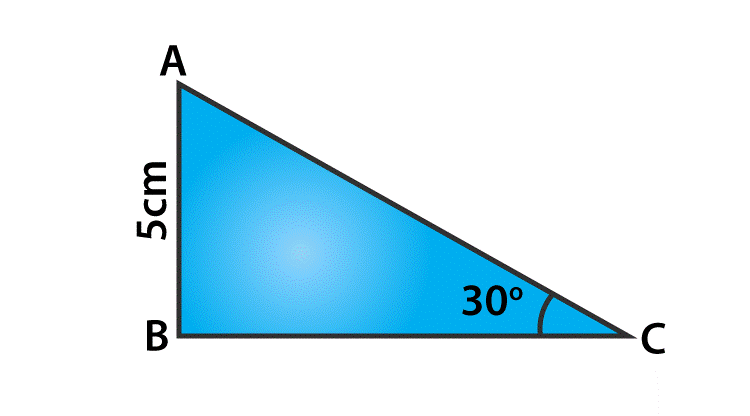 To find the length of the side AC, we consider the sine function, and the formula is given by

Sin 30°= Opposite Side / Hypotenuse side

Therefore, the length of the hypotenuse side, AC = 10 cm.

Question 2: If a right-angled triangle has a side opposite to an angle A, of 6cm and hypotenuse of 12cm. Then find the value of angle.

Solution: Given, Side opposite to angle A = 6cm

By sin formula we know that;

Sin A = Opposite side to angle A/Hypotenuse

So if we compare,

Hence, the required angle is 30 degrees.

Question 3: If a right-angled triangle is having adjacent side equal to 10 cm and the measure of angle is 45 degrees. Then find the value hypotenuse of the triangle.

Solution: Given adjacent side = 10cm

Now, by sin formula, we know,

Keep visiting BYJU’S for more information on trigonometric ratios and its related articles, and also watch the videos to clarify the doubts.

What is the exact value of sine 30 degrees?

What is the value of sine 30 in the form of fraction?

The value of sin 30 in the form fraction is ½

What is sine 30 degrees in radian?

What is the formula for sine function?

Sine of an angle, in a right-angled triangle, is equal to the ratio of opposite side of the angle and hypotenuse.
Sine A = Opposite Side/Hypotenuse

How to find the value of tan 30 with respect to sin and cos?