There is a number of methods of calculations among which are functions, differentiation and integration. Application of Integrals is applied in various fields like Mathematics, Science, Engineering etc. For the calculation of areas, we use majorly integrals formulas. So let us give here a brief introduction on integrals based on the Mathematics subject to find areas under simple curves, areas bounded by a curve and a line and area between two curves, and also the application of integrals in the mathematical disciplines along with the solved problem.

An integral is a function, of which a given function is the derivative. Integration is basically used to find the areas of the two-dimensional region and computing volumes of three-dimensional objects. Therefore, finding the integral of a function with respect to x means finding the area to the X-axis from the curve. The integral is also called as anti-derivative as it is the reverse process of differentiation.

There are basically two types of integrals, Definite and Indefinite. Definite Integral is defined as the integral which contains definite limits,i.e., upper limit and lower limit. It is also named as Riemann Integral. It is represented as;

Indefinite Integral is defined as the integral whose upper and lower limits are not defined.

\(\int\)f(x)d(x)=F(x)+C, is defined as the indefinite integral, where C is the constant value.

There are many applications of integrals, out of which some are mentioned below:

Integrals are used to calculate

Let us discuss here how the application of integrals can be used to solve certain problems based on scenarios to find the areas of the two-dimensional figure.

Example: Find the area enclosed by the circle x2+y2=r2, where r is the radius of the circle.

Solution: Let us draw a circle in the XY plane with a radius as r. 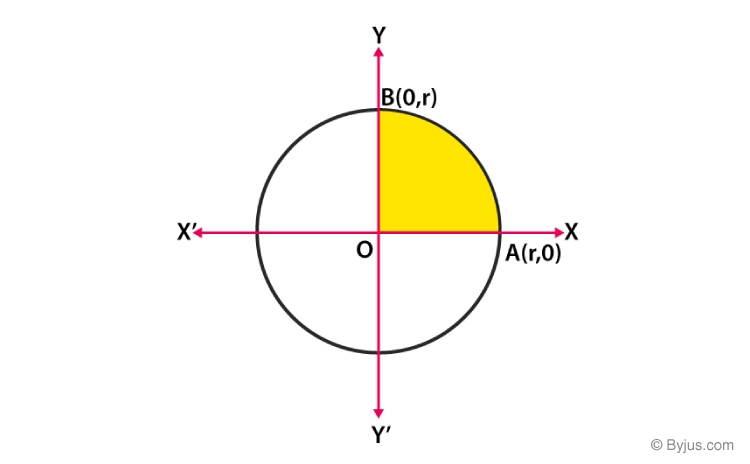 Now, from the equation of circle,

The region OABO lies in the first quadrant of the x-y plane.

From the differentiation formula,

Hence, is the answer.

With the above example problem, we hope the concept of integrals is understood. In the same way, we can apply integrals to find the area of enclosed in eclipse, the area of the region bounded by the curve or for any enclosed area bounded in the x-axis and y-axis.

The application of integrations in real life is based upon the industry types, where this calculus is used. Like in the field of engineering, engineers use integrals to determine the shape of building constructions or length of power cable required to connect the two substations etc. In Science, it is used to solve many derivations of Physics topics like the centre of gravity etc. In the field of graphical representation, where three-dimensional models are demonstrated.

The application of integrals class 12 syllabus covers to find the area enclosed by the circle and similar kind of question pattern.