In Geometry, an angle is a figure which is formed by two rays, which shares a common point called a vertex. The two rays represent the sides of the angle. The word “Angle” comes from the Latin word “Angulus”, which gives the meaning “corner”. The angles are formed by the intersection of two curves in this plane. There are different types of angles formed in the plane surface. They are:

In this article, we are going to discuss one of the types of angles called “Obtuse Angle” in detail with its definition, properties, and examples.

Let us consider the below example, 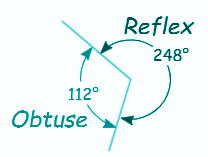 Obtuse Angle of a Triangle

Obtuse Angle of a Rhombus 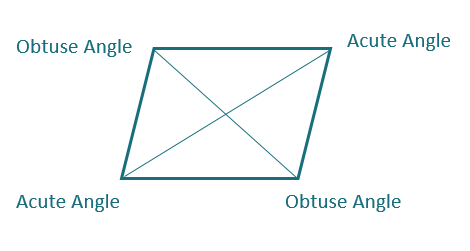 Obtuse Angle of a Parallelogram

Find the value of x for the given triangle ABC. 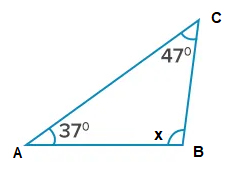 For the triangle ABC, the two given angle measures are:

We know that the sum of the interior angles of a triangle is 180 degrees.

If the reflex angle of the given rays is 244°, then what will be the measure of the interior angle?

Given that, the measure of the reflex angle = 244°

To find the unknown interior angle, use the relation:

Let the unknown angle be “x”.

Now, substitute the value of the reflex angle in (2)

Hence, the unknown angle obtained is an obtuse angle which measures 116°.

Register with BYJU’S – The Learning App and download the app today to explore more videos.

What are the six types of angles?

What is the shape of an obtuse angle?

As we know, the measure of an obtuse angle is greater than 90 degrees. We can observe many things in our life which are in the shape of obtuse angles such as hangars used to keep clothes in cupboards, hour hand and minute hand of a clock at 4 O’ clock and so on.

What is a zero angle?

If an angle has a measure of zero degrees, then it is called a zero angle. In other words, when two rays coincide with each other, then the angle between these two rays is zero angle.

What type of angle is 200 degrees?

What type of angle is 180 degrees?

Any angle which measures exactly 180 degrees is called a straight angle. Also, when the angle between two lines is 180 degrees, then they are called the linear pair of angles, i.e. they form a straight line.