In Geometry, the tangent is defined as a line touching circles or an ellipse at only one point. Suppose a line touches the curve at P, then the point “P” is called the point of tangency. In other words, it is defined as the line which represents the slope of a curve at that point. The tangent equation in differential geometry can be found using the following procedures:

Tangent of a Circle

A circle is also a curve and is a closed two dimensional shape. It is to be noted that the radius of the circle or the line joining the centre O to the point of tangency is always vertical or perpendicular to the tangent line AB at P, i.e. OP is perpendicular to AB as shown in the below figure. 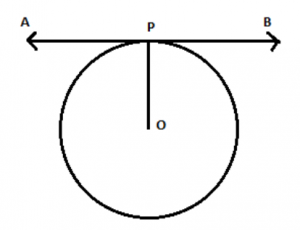 Thus, the tangent to a circle and radius are related to each other. This can be well explained using the tangent theorem. 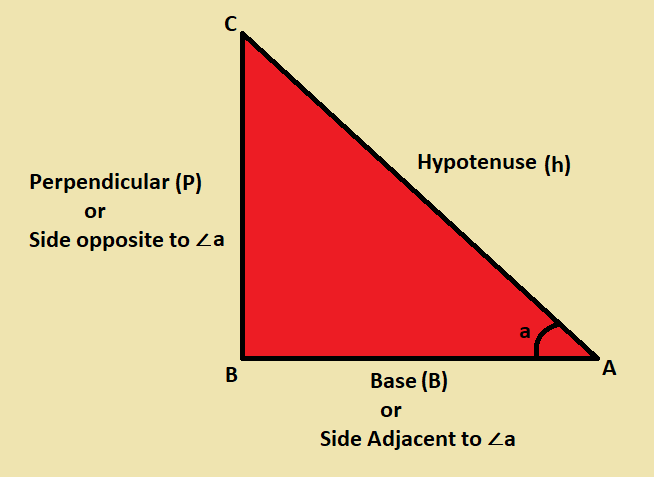 The Tangent Formula is given as:

Tan A = Opposite Side/Adjacent side

In terms of sine and cosine, tangent may be represented as:

That is, Sin A = Opposite Side/ Hypotenuse Side

Cos A = Adjacent Side/ Hypotenuse Side

Therefore,  tan A = Opposite Side/ Adjacent Side

In trigonometry, the tangent function is used to find the slope of a line between the origin and a point representing the intersection between the hypotenuse and the altitude of a right triangle.

However, in both trigonometry and geometry, tangent represents the slope of some object. Now let us have a look at the most important tangent angle – 30 degrees and its derivation.

How to Derive the Value of Tangent 30 Degrees?

Length of Hypotenuse = 2×Length of Opposite side

Length of Adjacent side=\(\sqrt{3}\) × Length of Opposite side

Similarly, we can derive the values of other angles using the properties of right-angled triangle.

Tangent Applications in Science And Technology

Find the tangent angle of a right triangle whose adjacent side is 5 cm and the opposite side is 7 cm.

Given, adjacent side = 5 cm

Formula to find tangent angle is, tan θ=Opposite Side/Adjacent Side

Register with BYJU’S learning app to get more information about the Maths-related articles and start practice with the problems.

What is a tangent angle?

In trigonometry, the tangent of an angle (say θ) is defined as the ratio of length of the side opposite to an acute angle θ to the side adjacent to θ. This can be found only for right angle triangles.

What is the function of tangent?

The function of tangent is one of the important periodic functions in trigonometry. This can be analysed using a unit circle for a given angle of measure θ. The unit circle should be drawn by taking the angle θ at the center with the positive x-axis. Thus, the unit circle and the angle line intersect with each at a point (x, y) such that the x-coordinate of the point is denoted as cos θ and the y-coordinate as sin θ.

What is the equation of tangent?

What are sine cosine and tangent?

How do you find an angle using tangent?

When the length of the opposite and adjacent sides are given, the angle made by the hypotenuse with other sides can be found using the inverse tangent function (i.e. arctan). That means, angle = arctan(opposite side/adjacent side)