The lines which coincide or lie on top of each other are called coincident lines. You may have learned about different types of lines in Geometry, such as parallel lines, perpendicular lines, with respect to a two-dimensional or three-dimensional plane.

Apart from these three lines, there are many lines which are neither parallel, perpendicular, nor coinciding. They could be oblique lines or intersecting lines, which intersect at different angles, instead of perpendicular to each other.

The word ‘coincide’ means that it occurs at the same time. In terms of Maths, the coincident lines are lines that lie upon each other in such a way that when we look at them, they appear to be a single line, instead of double or multiple lines.

If we see in the figure of coincident lines, it appears as a single line, but in actual we have drawn two lines here. First, we drew a line of purple color and then on top of it drew another line of black color. 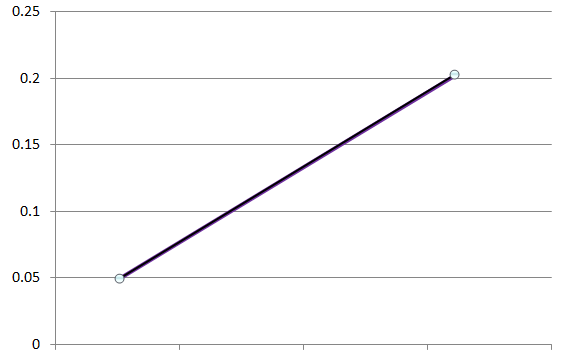 When we consider the equation of a line, the standard form is:

Where m is the slope of the line and b is the intercept.

Now, in the case of two lines which are parallel to each other, we represent the equations of the lines as:

For example, y = 2x + 2 and y = 2x + 4 are parallel lines. Here, the slope is equal to 2 for both the lines and the intercept difference between them is 2. Hence, they are parallel at a distance of 2 units.

When we speak about coincident lines, the equation for lines is given by;

When two lines are coinciding to each other, then there could be no intercept difference between them.

Because if we put ‘y’ on the Left-hand side and the rest of the equation on the Right-hand side, then we get;

Both the lines are the same.

Here, the given pair of equations is called consistent and they can have infinitely many solutions.

Go through the example given below to understand how to use the formula of coincident lines.

Therefore, the lines representing the given equations are coincident.

This can be shown graphically as: