The angle of elevation is a widely used concept related to height and distance, especially in trigonometry. It is defined as an angle between the horizontal plane and oblique line from the observer’s eye to some object above his eye. Eventually, this angle is formed above the surface. As the name itself suggests, the angle of elevation is so formed that it is above the observer’s eye.

For example, an observer is looking at a bird sitting at the rooftop, then there is an angle formed, which is inclined towards the bird from the observer’s eye. This elevation angle is used in finding distances, heights of buildings or towers, etc with the help of trigonometric ratios, such as sine, cosine and tangent.

In the above figure, you can see, an observer is looking at the object, standing on the ground, forming an angle θ with the line of sight and horizontal line. Here, if we join an imaginary line between the object and end of the horizontal line, a right angle triangle is formed. Thus we can use here trigonometry concept to find the distance of the observer from the tower or building. Height of the tower or building or the height at which the object is kept will be considered as perpendicular and the horizontal line will be considered as adjacent side of the triangle formed. The related terminology are given here.

The three terms related to the angle of elevation are

If two rays or two line segments meet at a common endpoint, then the point is known as the vertex. Two straight lines meet at a common point is said to form an angle. Angle play an important role, and some other definitions of angle are:

A straight line on the coordinate flat surface where all points on the line have the same y-coordinate. The angle and horizontal line combine to form the angle of elevation.

The line which is drawn from the eyes of the observer to the point being viewed on the object is known as the line of sight.

Here, the object is kept above the line of sight of the observer. If we know the elevation angle, then we can easily determine the distance or the altitude. The reason why we use here trigonometric functions is that the angle formed with the respect to the observer’s eye to the top of a building or a tower produces an imaginary right triangle, where the height of the building or tower is considered as the perpendicular of the triangle.

Tan θ = Opposite Side/Adjacent Side

Angle of Elevation and Depression Comparison 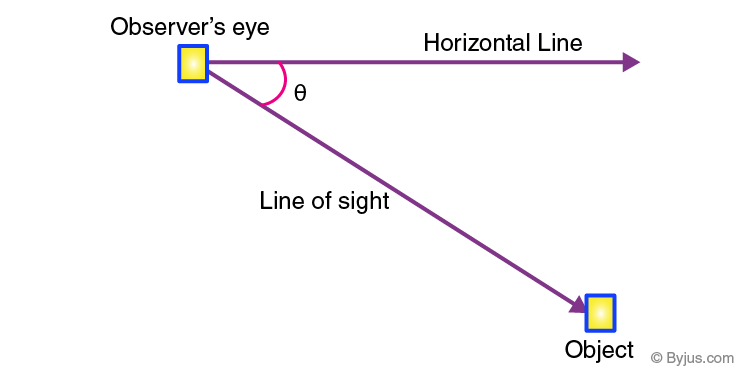 The formula of the angle formed here is given by;

tangent of angle of depression = Opposite side/adjacent side

Question 1: Find the value of θ in the given figure. 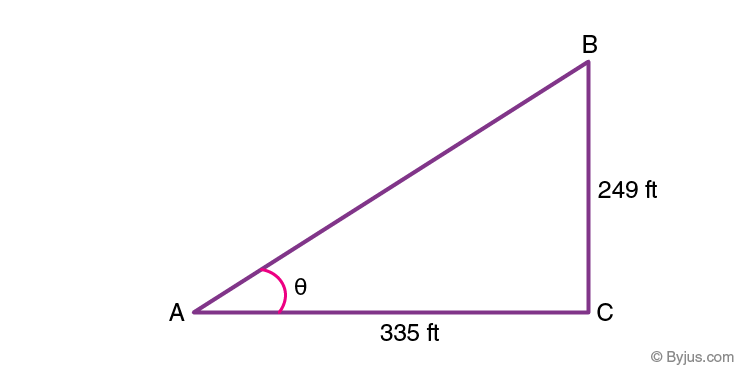 tan θ = Opposite side/ Adjacent side

Question 2: If the angle of inclination formed by an observer to an object, kept above a tower, is 45 degrees. Find the horizontal distance between the observer and the height of the tower is 150 ft.

To find: the distance between the observer and base of the tower.

By the formula, we know,

tan θ  = Height of the tower/Distance between observer and tower

Hence, the distance between the observer and tower is equal to the height of the tower.