In Geometry, a shape is defined as the figure closed by the boundary. The boundary is created by the combination of lines, points and curves. Basically, there are two different types of geometric shapes such as:

Each and every shape in the Geometry can be measured using different measures such as area, volume, surface area, perimeter and so on.  In this article, let us discuss the area of shapes for 2D figures and 3D figures with formulas.

An area is a quantity that expresses the extent of a two-dimensional figure or shape or planar lamina in the plane. Lamina shapes include 2D figures that can be drawn on a plane, e.g., circle, square, triangle, rectangle, trapezium, rhombus and parallelogram. Area of shapes such as circle, triangle, square, rectangle, parallelogram, etc. are the region occupied by them in space.

Polygon shape: A polygon is a two-dimensional shape that is formed by straight lines. The examples of polygons are triangles, hexagons and pentagons. The names of shapes describe how many sides exist in the shape. For instance, a triangle consists of three sides and a rectangle has four sides. Hence, any shape that can be formed using three straight lines is known as a triangle and any shape that can be drawn by linking four lines is known as a quadrilateral. The area is the region inside the boundary/perimeter of the shapes which is to be considered.

What are 2D shapes?

The two-dimensional shapes (2D shapes) are also known as flat shapes, are the shapes having two dimensions only. It has length and breadth. It does not have thickness. The two different measures used for measuring the flat shapes are area and the perimeter. Two-dimensional shapes are the shapes that can be drawn on the piece of paper. Some of the examples of 2D shapes are square, rectangle, circle, triangle and so on.

In general, the area of shapes can be defined as the amount of paint required to cover the surface with a single coat. Following are the ways to calculate area based on the number of sides that exist in the shape, as illustrated below in the fig. 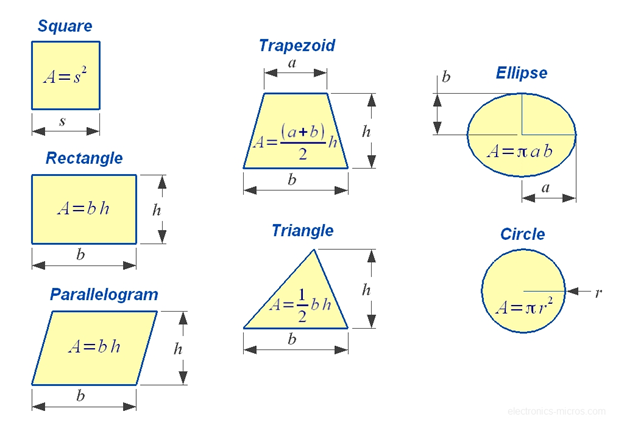 Let us write the formulas for all the different types of shapes in a tabular form.

What are 3D shapes?

According to the International System of Units (SI), the standard unit of area is the square meter (written as m2) and is the area of a square whose sides are one meter long. For example, a particular shape with an area of three square meters would have the same area as three such squares. The surface area of a solid object is a measure of the total area that the surface of the object occupies.

For 3D/ solid shapes like cube, cuboid, sphere, cylinder and cone, the area is updated to the concept of the surface area of the shapes. The formulas for three-dimension shapes are given in the table here:

In addition to the area of the planar shapes, an additional variable i.e the height or the radius are taken into account for computing the surface area of the shapes.

Consider a circle of radius r and make endless concentric circles. Now from the centre to the boundary make a line segment equal to the radius and cut the figure along with that segment. It’ll be formed a triangle with base equal to the circumference of the circle and height is equal to the radius of the outer circle, i.e., r. The area can thus be calculated as ½ * base * height  i.e

Find the area of the circular path whose radius is 7m.

By the formula of area of circle, we know;

By the formula of area of a square, we know;

Find the area of the cone, whose radius is 4cm and height is 3cm.

Given, radius of cone = 4cm

As per the formula of area of cone, we know;

To learn more Maths-related articles, stay tuned with BYJU’S – The Learning App and download the app to learn with ease by exploring more videos.