A “Curved line” or simply a ” Curve” is a line that is not straight. We see curves everywhere around us. Be it art or decoration or a general thing, and curves can be seen around us. In this article, we are going to learn the definition of a curved line, different types of curved lines with many examples.

What is a Curved Line?

A curved line is one that is not straight and is bent. Ideally, it is smooth and continuous. In other words, a curve is defined as a group of points that resemble a straight line that falls between two neighbouring points. We know that the curvature of the straight line is zero. Hence, if the curvature of a line is not zero, then we can call it a curved line. The following figure shows the different types of curved lines. 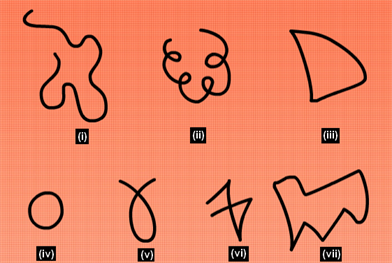 Difference Between Straight and Curved Line

There are many examples of curved lines like the alphabets – C and S. Whereas the letters A, M, N, L, etc are not examples of curves since they can be formed by joining the line segments (or straight lines).

The curved lines can be classified into different types. They are:

A simple curve is defined as a curve that doesn’t cross itself.  We know that the open curve has two endpoints whereas a closed curve has no endpoints. A closed curve creates a path that may begin from any point and terminate at the same point. Thus, the simple curve may be open or closed.

A plane curve where a set of points are located on the Euclidean plane and are represented in terms of polynomials is called Algebraic Curve. The polynomial’s degree denotes the degree of the curve.

Question: Identify the open and closed curves from the below figure.

What is a curved line?

A curved line is a type of straight line with bent. In other words, it is a geometrical object similar to the line having curvature.

What are the examples of curved lines?

There are many examples of curved lines in the English alphabet such as C, S and O.

Why we use curved lines?

Curved lines are used mainly in the graphical representation of different types of functions.

What are the types of curves?

What is a simple curve?

A curve that doesn’t cross itself is called a simple curve, otherwise, it is a complex (or non-simple) curve. For example, “U” is the simple curve and “8” is the non-simple curve.