Linear algebra is one of the important branches of mathematics. Linear algebra is basically the study of vectors and linear functions. It is a key concept for almost all areas of mathematics. Linear algebra is considered a basic concept in the modern presentation of geometry. It is mostly used in Physics and Engineering as it helps to define the basic objects such as planes, lines and rotations of the object. It allows us to model many natural phenomena, and also it has a computing efficiency. In this article, you are going to learn about the basic introduction, its components, problems, linear equations and its applications.

The general linear equation is represented as

b – represents the constant

There exists a system of linear algebraic equations, which is the set of equations. The system of equations can be solved using the matrices.

It obeys the linear function such as

The most important topics covered in the linear algebra includes:

Here, the three main concepts which are the prerequisite to linear algebra are explained in detail. They are:

All these three concepts are interrelated such that a system of linear equations can be represented using these concepts mathematically. In general terms, vectors are elements that we can add, and linear functions are the functions of vectors that include the addition of vectors

As we know that linear algebra deals with the study of vector spaces and the linear transformations between them. By the definition of vector, it is a physical quantity that has both magnitude and direction. A vector space is defined as the collection of objects called vectors, which may be added together and multiplied (i.e. scaled) by numbers, called scalars. Generally, real numbers are taken as scalars, but there exist vector spaces with scalar multiplication by non-real numbers, i.e. complex numbers, or naturally any field.

The operations such as vector addition and scalar multiplication must satisfy specific requirements, called vector axioms. Generally, the terms real vector space and complex vector space are used to define that the scalars are real or complex numbers, respectively.

Suppose V be any vector space with elements a, b, c and scalars m, n over a field F, then the vector axioms are given by:

These four axioms define that the vector space V is an abelian group under addition.

An element of a specific vector space may have different characteristics. For example, the elements can be a sequence, a function, a polynomial or a matrix. Linear algebra is affected by those properties of such things that are common or familiar to all vector spaces.

A linear map can be written for two given vector spaces namely V and W over a field F. This is sometimes referred to as linear transformation or mapping of vector spaces. Thus, it is given by:

This allows us to write the addition of scalar multiplication of elements such as:

A linear function is an algebraic equation in which each term is either a constant or the product of a constant and a single independent variable of power 1. In linear algebra, vectors are taken while forming linear functions. Some of the examples of the kinds of vectors that can be rephrased in terms of the function of vectors.

Mathematically, linear function is defined as: 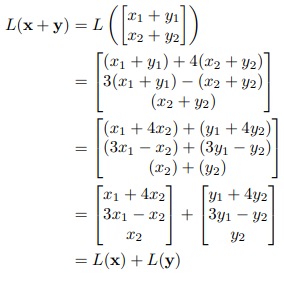 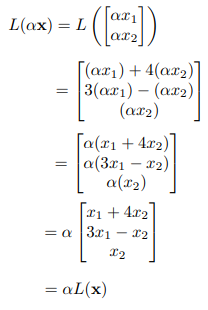 Therefore, L is a linear function.

Mathematically, this relation can be defined as follows.

Go through the example given below to understand this mapping in detail.

A room contains x bags and y boxes of fruits and each bag contain 2 apples and 4 bananas and each box contains 6 apples and 8 bananas. There are a total of 20 apples and 28 bananas in the room. Find the value of x and y.

Write the simultaneous equation for the given information that the above condition becomes true.

Here the example given above shows the system of linear equations.

Now, write the above equation as equality between 2- vectors and using the rules, we get

We denote the functions as an array of numbers is called a matrix.

Here, some of the linear algebra applications are given as:

Find the value of x, y and z for the given system of linear equations.

The matrix is of the form,

After performing elementary row operation and augmented matrix, it is reduced to the form

Now the reduced echelon form of the above matrix is,

Therefore, the unique solution for this is,

Thus, the above determinant can be equated as:

Now, multiply both sides by -1, we get

For more related articles on the system of linear equations, register with BYJU’S – The Learning app and watch interactive videos.

What is meant by linear algebra?

Linear algebra is the study of lines, planes, vector spaces, mappings, which are required for the linear transformation.

Mention the applications of linear algebra?

Some of the real-life applications of linear algebra include facial recognition, testing of coding in software engineering, ranks in the search engine, graphics and so on.

What is called a linear function?

A linear function is a kind of algebraic equation, in which each term is a constant or a product of constant and a single independent variable of power 1.

What is meant by a vector?

A vector is a quantity that has two independent properties called magnitude and direction.

What is meant by vector space?

A vector space consists of a set of objects called vectors, which can be added together and multiplied by the numbers called scalars.