Correlation refers to a process for establishing the relationships between two variables. You learned a way to get a general idea about whether or not two variables are related, is to plot them on a “scatter plot”. While there are many measures of association for variables which are measured at the ordinal or higher level of measurement, correlation is the most commonly used approach.

What Does Correlation Measure?

In statistics, Correlation studies and measures the direction and extent of relationship among variables, so the correlation measures co-variation, not causation. Therefore, we should never interpret correlation as implying cause and effect relation. For example, there exists a correlation between two variables X and Y, which means the value of one variable is found to change in one direction, the value of the other variable is found to change either in the same direction (i.e. positive change) or in the opposite direction (i.e. negative change). Furthermore, if the correlation exists, it is linear, i.e. we can represent the relative movement of the two variables by drawing a straight line on graph paper. 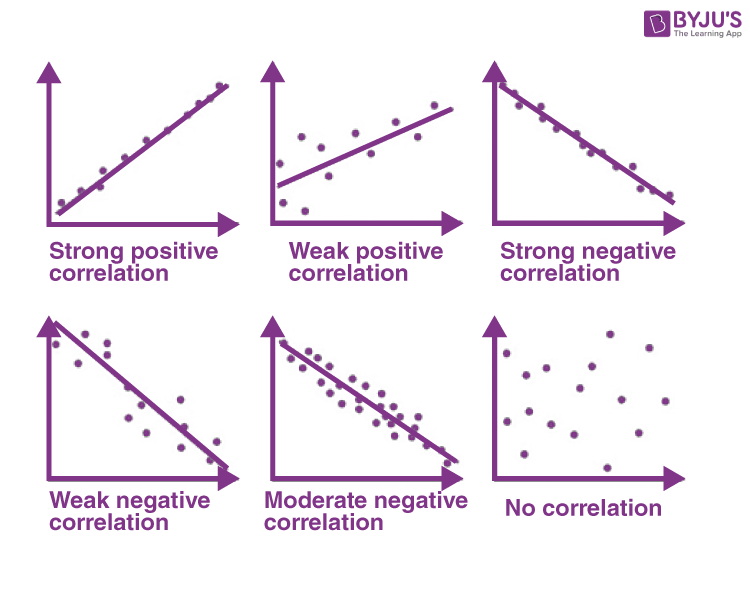 Where n = Quantity of Information

Σxy = Sum of the Product of first & Second Value

Σx2 = Sum of the Squares of the First Value

Σy2 = Sum of the Squares of the Second Value

The formula for the linear correlation coefficient is given by;

The formula is given by:

Where Sx and Sy are the sample standard deviations, and Sxy is the sample covariance.

Years of Education and Age of Entry to Labour Force Table.1 gives the number of years of formal education (X) and the age of entry into the labour force (Y ), for 12 males from the Regina Labour Force Survey. Both variables are measured in years, a ratio level of measurement and the highest level of measurement. All of the males are aged close to 30, so that most of these males are likely to have completed their formal education.

Table 1. Years of Education and Age of Entry into Labour Force for 12 Regina Males

What is a correlation in statistics?

In statistics, correlation is a statistic that establishes the relationship between two variables. In other words, it is the measure of association of variables.

What is a correlation of 1?

What does a correlation of 0.45 mean?

What are the 4 types of correlation?

What is a correlation example?

Positive, negative, or no correlation can be observed between two variables. An example of a positive correlation would be dimensions and weight. The big objects look heavier and vice versa. Also, small objects tend to appear thin.