sin θ = (Opposite side to θ/Hypotenuse)

Or θ = Sin-1 (Opposite side to θ/Hypotenuse)

In the same way, Inverse Cosine and Inverse Tan can be determined.

The function of inverse or inverse function is used to determine the angle measure, with the use of basic trigonometric ratios from the right triangle. Mostly, the inverse sine function is represented using sin-1. It does not mean that sine is not raised to the negative power.

What is Sine Function?

In a right-angle triangle, a sine function of an angle θ is equal to the opposite side to θ divided by hypotenuse.

This is the basic formula for sine function. See the figure below.

What is Inverse Sine Function?

In the above explanation, we learned about sine function, where we can determine the sin of any angle if the opposite side and hypotenuse is known to us.

What if we have to find just the measure of angle θ? The inverse sine function or Sin-1  takes the ratio, Opposite Side / Hypotenuse Side and produces angle θ. It is also written as arcsin.

Sin inverse is denoted by sin-1 or arcsin

Let us see an example of inverse of sine function.

Let us consider if we want to find the depth(d) of the seabed from the bottom of the ship and the following two parameters are given:

The Sine function will help to find the distance/depth d of the ship from the sea bed by the following method:

The formula for the trigonometric sine function is given by:

sin (θ) Opposite Side/ Hypotenuse

The inverse sine function formula or the arcsin formula is given as:

sin-1 (Opposite side/ hypotenuse) = θ 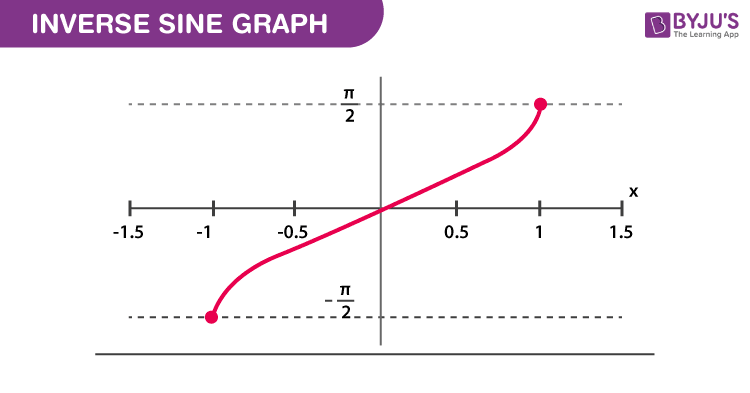 Let us proof this equation.

If we differentiate g(x) with respect to x, we get;

Now we know, the inverse of sine function,  y = Sin-1x

Hence we can write, the derivative as;

Since, we know, by trigonometric identities;

Therefore, we can write;

Now, again putting this value in the derivative;

Now, if the angle is not given and we want to calculate it, then we use the Inverse functions and the question will be asked in the following way:

Problem: What is the angle Sin = Opposite / Hypotenuse, has?

Solution: Let’s take the measurement from above example only.

We want to find the angle “α ”

Let’s find it out with Inverse sin:

Did you know: Sin and Sin-1 are vice-versa.

Need to practice more on the trigonometric functions, Download BYJUS -The learning app.

What is inverse sine?

Inverse sine is one of the trigonometric functions which is used to find the measure of angle in a right triangle. Suppose, α is the angle between hypotenuse and its adjacent side. Then, the measure of angle α is given by;
α = sin-1 (opposite side of α/hypotenuse)
Where sin-1 represents the sine inverse function.

What is the value of sin inverse of 1?

What is the difference between sin-1 and 1/sin x?

Sin-1 is the inverse of sine function. -1 here do not represent the exponent. Arcsin α means the arc whose sine is α. Whereas 1/sin x shows the reciprocal of sine function, which is also equal to cosecant function.