The square root of 5 is usually written as √5 in mathematics and is said to be the positive algebraic number which is multiplied by itself will give the prime number 5. It is more accurately called the principal square root of 5, and this is basically to distinguish itself from the negative number with similar property.

Like √2 and √3, the square root of 5 also appears extensively in the formulae for exact trigonometric constants. It also appears in several other instances. Geometrically, √5 is said to be the diagonal of a rectangle having side length of 1 and 2. This is yet again proved by the Pythagorean Theorem.

What is the Square Root of 5?

How to Find the Square Root of 5?

If you have been wondering how to find the square root of 5, the easiest way you can do so is by the division method. In this method, you have to first make an estimate, meaning you have chosen a close number by finding at-least two square roots which are perfect. It has been those square root that your number is between. Then, you can divide the number by one of those square roots. Once you start and continue with the division process, you will need to take the average of the result of step 2 and the root. And finally, you can use the result that you get in step 3. Repeat the 2nd and 3rd step until you get a number that is satisfactory or accurate enough for you. The example is given below: 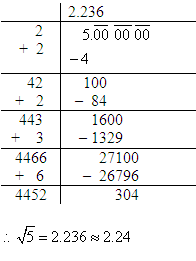 Apart from this, there are a lot of ways you can find the square of any number. To find out more, you can check out BYJU’S YouTube channel to learn the methods. 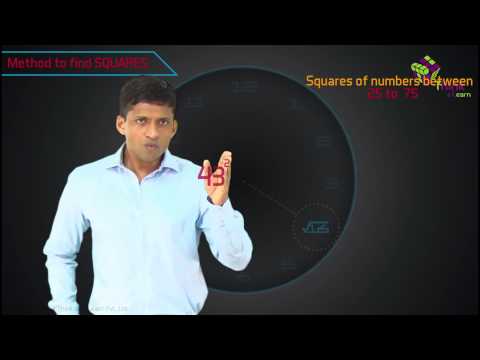