What is a Plane?

A plane, in geometry, prolongs infinitely in two dimensions. It has no width. We can see an example of a plane in coordinate geometry. The coordinates define the position of points in a plane.

What is a point?

A point is a location in a plane that has no size, i.e. no width, no length and no depth.

What is a line?

A line is a set of points that stretches infinitely in opposite directions. It has only one dimension, i.e., length. The points that lie on the same line are called collinear points.

Arrows designate the truth that it extends infinitely along the x-axis and the y-axis on the number lines’ ends. These number lines are two-dimensional, where the plane extends endlessly. When we plot the graph in a plane, then the point or a line, plotted does not have any thickness.

A  surface comprising all the straight lines that join any two points lying on it is called a plane in geometry. In other words, it is a flat or level surface. In a Euclidean space of any number of dimensions, a plane is defined through any of the following uniquely:

Two planes can be related in three ways, in a three-dimensional space.

The method to get the equation of the line of intersection connecting two planes is to determine the set of points that satisfy both the planes’ equations. Since the equation of a plane comprises three variables and two equations (because of two planes), solving the simultaneous equations will give a relationship between the three variables, which is equal to the intersection line equation.

Properties of a Plane

What is a Plane Figure?

A plane figure is defined as a geometric figure that has no thickness. It lies entirely in one plane. It is possible to form a plane figure c with line segments, curves, or a combination of these two, i.e. line segments and curves. Let’s have a look at some examples of plane figures in geometry such as circle, rectangle, triangle, square and so on. These are given in the below figure. 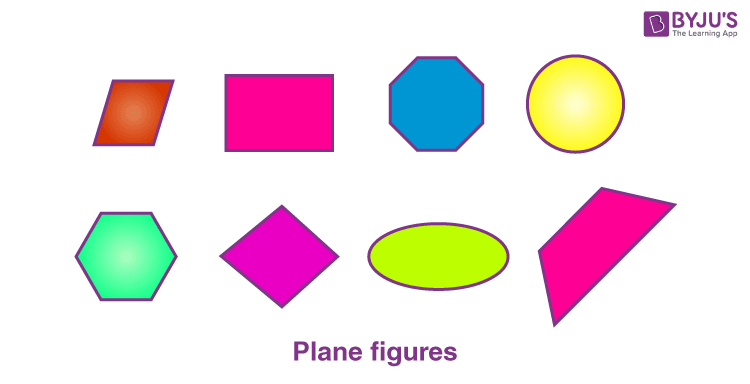