A cone is a shape formed by using a set of line segments or the lines which connects a common point, called the apex or vertex, to all the points of a circular base(which does not contain the apex). The distance from the vertex of the cone to the base is the height of the cone. The circular base has measured value of radius. And the length of the cone from apex to any point on the circumference of the base is the slant height. Based on these quantities, there are formulas derived for surface area and volume of the cone. In the figure you will see, the cone which is defined by its height, the radius of its base and slant height. 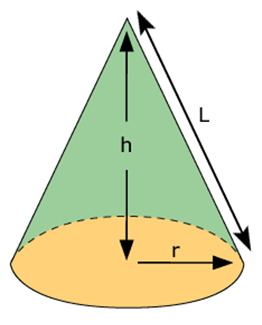 The formula for the surface area and volume of the cone is derived here based on its height(h), radius(r) and slant height(l).

The slant height of the cone (specifically right circular) is the distance from the vertex or apex to the point on the outer line of the circular base of the cone. The formula for slant height can be derived by the Pythagoras Theorem.

Volume of the Cone

We can write, the volume of the cone(V) which has a radius of its circular base as “r”, height from the vertex to the base as “h”, and length of the edge of the cone is “l”.

Surface Area of the Cone

We can put the value of slant height and calculate the area of the cone.

As we have already discussed a brief definition of the cone, let’s talk about its types now. Basically, there are two types of cones;

A cone which has a circular base but the axis of the cone is not perpendicular with the base, is called an Oblique cone. The vertex of this cone is not located directly above the centre of the circular base. Therefore, this cone looks like a slanted cone or tilted cone. 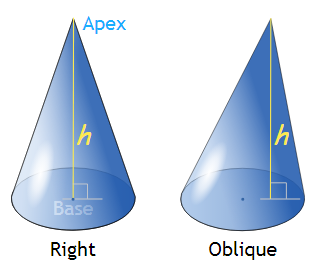 Frustum of a cone is a piece of the given circular or right circular cone, which is cut in a manner that the base of the solid and the plane cutting the solid are parallel to each other. Based on this, we can calculate the surface area and volume also. For more details, read the frustum of a cone from here.

Solution: By the formula of volume of the cone, we get,

Question: What is the total surface area of the cone with the radius = 3 cm and height = 5 cm?

Solution: By the formula of the surface area of the cone, we know,

Download BYJU’S – The Learning App and get personalised video content based on different geometrical concepts of Maths.